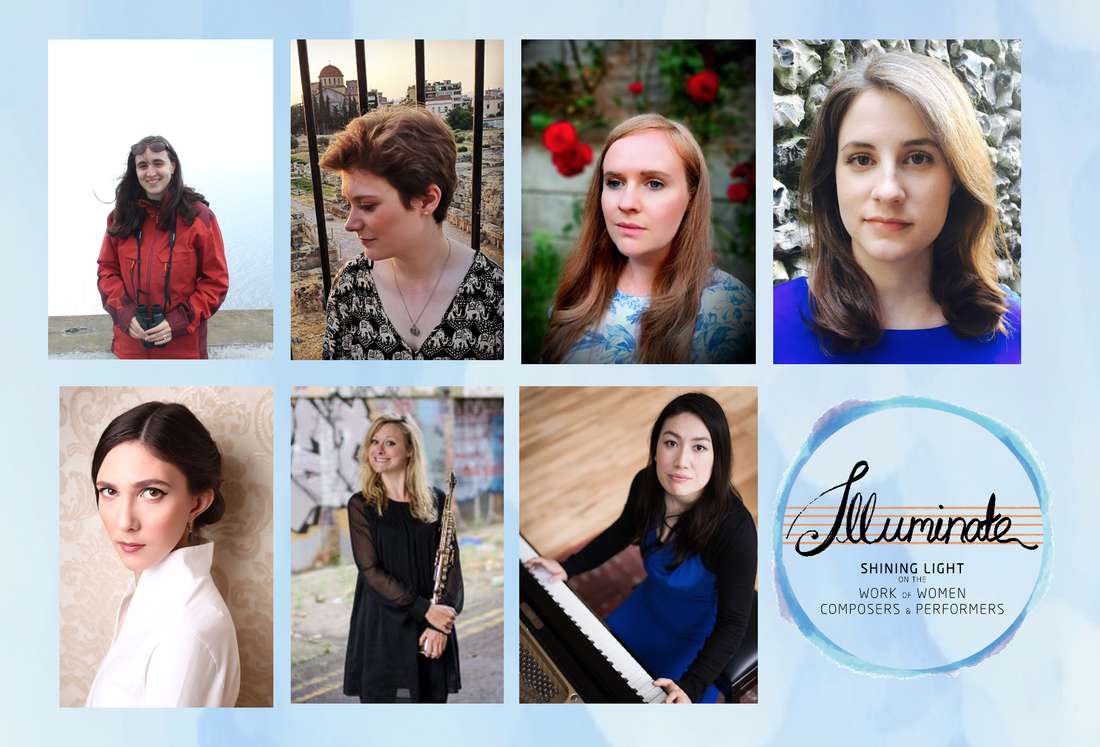 ​She specialises in writing strong memorable melodies and arranging and orchestrating music to tell a story, and has a special interest in site-specific works, projects empowering women and marginalised communities and projects exploring the link between music and the natural world.

Her work encompasses concert music, sound installations, and music for film, musical theatre and opera. Recent commissions include compositions for Psappha Ensemble, Illuminate Women’s Music, the Schneiberg Museum and the Museum of Oriental Art of Turin.
Alongside her work as a composer and arranger, Nina is a lecturer in composition and Music and Sound for the Moving Image at the British and Irish Modern Music Institute in London.

Rachael Gibson is a guitarist and composer for instruments and electronics based in Merseyside. A part of her practice focuses on how electronics can play with the relationship between sound and interaction, highlighting the way we interact with each other and the world around us. Recently, she has been a participant in the Wanderscapes project by The Old Courts Wigan, creating a site-specific piece for the Royal Court Theatre and she has composed original music for Whatstick Theatre’s Production of Contractions By Mike Bartlett, performed at the Etcetera Theatre in June 2021. She will be participating in the Yorkshire Sound Women’s Network Sound Pioneer’s project, creating a new multichannel piece at the University of Huddersfield in July 2021.

Angela Elizabeth Slater is a UK-based composer, Illuminate Women’s Music Director, Professor of Composition at LPMAM, and Associate Lecturer in Composition at Cardiff University. She has an interest in musically mapping different aspects of the natural world into the fabric of her music.
Recent significant achievements include being selected for the RPS Composer programme for 2021-22, 2020-22 Tanglewood Composition Fellow, and a 2017-18 Britten-Pears Young Artist through which Angela worked with Oliver Knussen, Colin Matthews and Michael Gandolfi, developing Soaring in Stasis which received its premiere at 2018 Aldeburgh Festival. Her work Eye o da hurricane (for string quartet), was shortlisted in the British category ISCM world music days in 2017. Angela was the New England Philharmonic’s 2018 call for scores winner resulting in the world-premiere of her orchestral work Roil in Stillness in April 2019. Angela also became the 2018 Young Composer of the Year for the London Firebird Orchestra, leading to a new work, Twilight Inversions, which received its world-premiere on 11th June 2019. Angela was the 2019 Mendelssohn Scholar resulting in her furthering her studies with Michael Gandolfi at NEC in 2019.
In 2019 Angela had further exciting performances including New-York based Hildegard National Sawdust ensemble performing Shades of Rain for piano trio, followed by a world-premiere of her work Of Spheres by the Semiosis quartet as part of the IAWM conference at Berklee College of Music (Boston). Angela has also recently attended the prestigious Choreographer-Composer Lab at Phoenix Dance Theatre with the intention of furthering her artistic ambition and collaborative practices with other artforms. In 2021 she wrote a new work called Beyond Yourself for Orkest de erepri as part of Young Composer’s Meeting in Apeldoorn, two new works for Royal Scottish National Orchestra, alongside six new solo works for the Connected skies project funded by Arts Council England. Across summer 2021 she written new works and had performances at JAM, SCBA, INMF and Fresh Squeezed Opera.
Looking forward to Autumn 21 and 2022 Angela is looking forward to the performance of her piano concerto Tautening skies supported by PRSF. She will also be developing a new accordion concerto working with accordionist Kamila Olas through Arts Council England’s DYCP fund, and composing new works for the RPS Composers programme.

FIND OUT MOREIf you are interested in finding out more about Angela, hearing and keeping up to date with her work, take a look at her website and social media below:

Blair Boyd is an American composer currently based in the UK whose highly energized compositions engage with physical movement and the perception of time. Most recently her work has been performed by members of the Heath Quartet, Dr. K Sextet, and Cardiff University’s Contemporary Music Group. She has also worked extensively with Bristol CoMA who performed her piece for flexible ensemble Tracing Outside the Lines at both Bristol University’s Victoria Rooms and Colston Hall in 2014. In 2016 Shadow Woman, recently recorded for future release, was premiered by harpist Gwenllian Llyr and soprano Sarah Dacey as part of a collaboration with the Coma &amp; Disorders of Consciousness Research Centre at Cardiff University. She was also commissioned by the Girls’ Day School Trust to compose and conduct the finale piece for the GDST Young Musician of the Year Competition in 2018. Boyd holds degrees from the University of Tennessee (BMus) and the University of Bristol (MA). She has also studied with Michael Zev Gordon (Cheltenham Composers’ Academy), Judith Weir (Dartington), and Kenneth Hesketh (MusicFest Aberystwyth) on summer festival courses.  Her piece for string quartet Juncture was recently presented in masterclass with Helmut Lachenmann as part of the HighSCORE New Music Festival in Pavia, Italy, where she also received tuition from Amy Beth Kirsten, Sarah Kirkland Snider, and Dmitri Tymoczko. Currently a postgraduate at Cardiff University, Boyd is writing her first chamber opera The Yellow Wallpaper under the supervision of Dr. Arlene Sierra.  She is also co-organizer of Illuminate Women’s Music Concert Series, anew project to promote the work of emerging women composers and performers.

Lara Poe is a Finnish-American composer based in London.  She has collaborated with musicians including JACK quartet, Dal Niente, Sound Icon, Semiosis quartet, Jonathan Radford, Laura Farré Rozada, Aija Reke, and Timo Kinnunen.  Poe received the 2017 BMI Student Composer Award William Schuman Prize, and won the 2016 American Prize in Chamber Music composition, student division. She was a 2019 Tanglewood Music Center Composition Fellow, and has been subsequently awarded a commission for the Santa Fe Chamber Music Festival as a composer for the Young Composer String Quartet Project with FLUX quartet.  Poe attended the 2017 Britten-Pears Young Artist Programme; her piece Mirror Rim was subsequently performed at the 2018 Aldeburgh Festival.  She participated in the 2018-2019 LSO Panufnik Scheme, and represented Finland at Ung Nordisk Musik Piteå in 2019.  Poe holds an Mmus with distinction from the Royal College of Music, studying with Kenneth Hesketh, and a bachelor in composition from Boston University, where she studied with several people including Joshua Fineberg and Alex Mincek.  Earlier, she studied at the New England Conservatory Preparatory School with Rodney Lister.

Naomi Sullivan lives and works as a freelance saxophonist in London. She has been Head of Saxophone at the Royal Birmingham Conservatoire since 2008.
After studies in Manchester (Chetham's School of Music), London (Royal College of Music) and Evanston (Northwestern University, Chicago), she performed in the UK as part of the Countess of Muster Recital Scheme, Park Lane Group and ‘Live Music Now!’
As a chamber musician, Naomi has been part of several groups – including Paragon Saxophone Quartet, Zephirus Quartet and most recently with Flotilla, lead by Kyle Horch.

She is currently performing with Sounding Cities - a collaborative project that uses audio/visual arts to explore the environment in which we live.
In 2009, at the World Saxophone Congress in Bangkok, Naomi co-founded syzygy, with the aim to perform established contemporary works saxophone quartet. The group have since performed at venues including - Adrian Boult Hall, Birmingham, as part of the Frontiers + Andriessen Festival, Huddersfield Contemporary Music Festival, the Purcell Room and 'Proud', Camden. In 2014, with support from Help Musician's UK, C.A.S.S and the many kind supporters of a Kickstarter project, syzygy released a debut recording of David Maslanka's 'Songs for the Coming Day'.

Kumi Matsuo is a versatile solo pianist, chamber musician and accompanist. She has won numerous competitions including First Prize in the 6th Isidor Bajic Memorial Piano Competition in Serbia and First Prize in the 5th Louisiana International Piano Competition, USA. She is now on the staff at RCM, working as Duo Coach to the String Faculty, as well as accompanying other instruments.
Kumi studied at the Toho Gakuen College of Music, Tokyo, and then at the Royal College of Music (RCM), London studying with John Blakely and Ashley Wass and completed her studies there with Artist Diploma and Master of Music in Performance with Distinction. She has also finished the Anthony Saltmarsh Junior Fellow in Accompaniment. Her study was generously supported by Charles Napper Award, the Russell Gander Award and the Rohm Music Foundation.
During her study at RCM, Kumi won RCM concerto competition twice and performed Ravel's Piano Concerto for Left Hand in Cadogan Hall with RCM Sinfonietta conducted by Peter Stark and Prokofiev's 3rd Piano Concerto with RCM Symphony Orchestra under Martin André in the Amaryllis Fleming Concert Hall, RCM. She also played Schnittke's Concerto Grosso No.1 with RCM Chamber Orchestra under Vladimir Jurowski at the Queen Elizabeth Hall.
As soloist and chamber musician Kumi has played extensively in the UK, and in the USA, France, Italy, Holland, Poland, Romania, UAE, India, Korea and Japan. She made her New York debut at Carnegie Hall Weill Recital Hall and gave an extended concerto and recital tour in Louisiana.