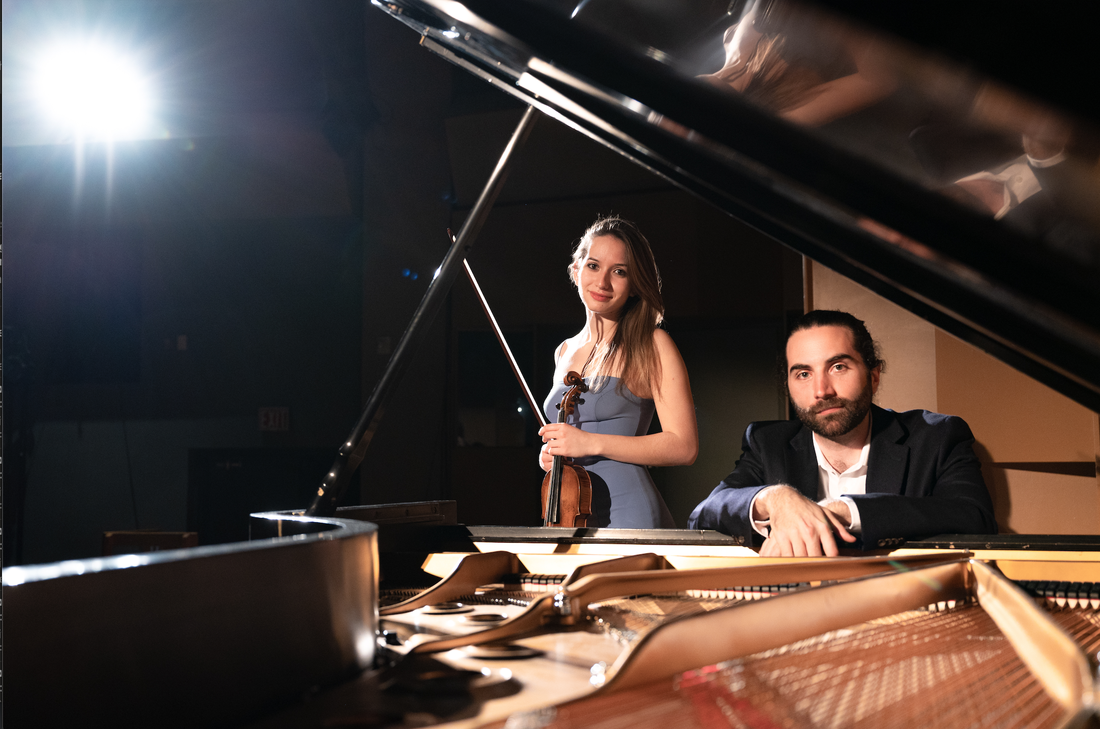 Rebecca Clarke (1886-1979): Midsummer Moon for Violin and Piano – 6 minutes
Written in April 1924, Rebecca Clarke’s Midsummer Moon was dedicated to a Hungarian violinist, Adila Fachiri.Although Clarke has emerged as a prominent British composer, a large part of her output was never published and remains the property of her estate. Clarke was the first woman to study composition at the Royal College of Music under Sir Charles Villiers Stanford, although paternal opposition combined with financial troubles forced her to withdraw. Abandoning her musical education, Clarke made history by becoming one of the first six women to play in an orchestra professionally, hired to augment Sir Henry J. Wood’s Queen’s Hall Orchestra in 1912. This piece was first performed in London on May 12th1924 by Adila Fachiri and Bertram Harrison.

Clara Schumann (1819-1896): Three Romances for Violin and Piano Op. 22 – 10 minutes
Dedicated to her close friend and virtuoso violinist Joseph Joachim, Clara Schumann composed this trio of romances in 1853. Scored for violin and piano, the romances were written to be performed on tour with Joachim, and were also played before King George V of Hanover. As she hadn’t composed since 1847, this had been a productive and culminating year for Schumann. After her death in 1896, the romances were largely forgotten. Whileraising eight children after her husband’s early death, Schumann had a successful career as a concert pianist, and composed 66 works, all of them by 1853. The Three Romances, Op. 22, were among the last pieces she wrote.

Ethel Smyth (1858-1944): Sonata for Violin and Piano in A Minor, Op.7 - 25 minutes
As a composer who specialised in operas, large-scale symphonic works, and choral works, Dame Ethel Smyth was a prime target for the critics’ exercises in gender-based aesthetics. Written in 1887, and completely unknown amongst string players, the sonata was dedicated to Elizabeth Lili Wach, (1845-1910), a supporter of the arts, a close friend, and the daughter of Felix Mendelssohn. The work comprises of four movements, with the third referencing Francesca da Rimini, who was consigned to the second circle of hell for lustfulness in Dante’s Inferno. Per the autograph score, the work was completed in March 1887 during Smyth’s last winter in Leipzig. Originally published in 1887 through J. Reiter-Biedermann, the copyright was renewed by universal edition in Vienna in 1923.
​
Amy Beach (1867-1944): Romance for Violin and Piano Op.23 – 5 minutes
Composed in 1893, Amy Beach dedicated this work to the distinguished American violinist Maud Powell.  The Arthur P. Schmidt Company published the work in 1893 and that same year Powell and Beach premiered the piece at the World’s Columbian Exposition in Chicago. Great leaps in register, swelling dynamics, frequent accelerations and retardandos illustrate the intensity and passion used by Beach within her writing in the late Romantic period.

Performer biographies:
​
Sofia Yatsyuk
Born in Ukraine, Sofia Yatsyuk moved to the United Kingdom in 2006 to study at the Purcell School of Music. She completed her undergraduate degree at the Royal Academy of Music in London under the tutelage of Mateja Marinkovic, and her master’s at McGill University in Montreal with Axel Strauss.

Sofia made her orchestral debut with the Ternopil Symphony Orchestra in 2014. She has performed as a soloist and chamber musician in Ukraine, Italy, Slovenia, Poland, China, Canada, France and the United Kingdom, including performances at Giuseppe Tartini’s house in Piran and the Parliament building in London. In 2019, Sofia was on staff at the West Island Music Academy in Montreal and a member of the El Sistema Encore programme in Kahnawake. She is currently the principal violinist of Sinfonia de l’Ouest and a member of Orchestre Nouvelle Génération in Montreal.
​
Over the last two years Sofia was the winner of the Marusia Yaworska Scholarship award, winner of the Kathleen Trust Award and recipient of the Heinz Saueressig scholarship for academic excellence. Sofia is currently a doctoral candidate in violin performance at McGill University, Schulich School of Music. Her dissertation research is focused on women composers of the late 19th and early 20th century within Britain and France. Striving to discover and promote music which is not receiving the recognition it deserves, she hopes to continue creating space for marginalised voices to be heard.

Suren Barry – Biography:
Born in Montreal and raised in Ottawa, pianist Suren Barry is now based in these two cities as a performer and educator. A sought-after soloist and chamber musician, Suren has been a featured performer at the Ottawa International Chamber Music Festival over the past decade, appearing in Rob Kapilow's "What Makes It Great" lectures, the Fall Concert Series, “Generation Next,” “Mozart!,” and several other events. Additionally, Suren has performed in the Master Piano Recital Series at Southminster, at the “Im Hayastan” (My Armenia) Festival in Yerevan, at Festival Pontiac Enchanté, and in many other recital series in Canada and the US. Suren is also the pianist for Montreal-based choir Ensemble Noir led by artistic director Floydd Ricketts, whose mandate is to illuminate works by or about people of colour.

Alongside pianist Carson Becke, Suren forms half of Duo Octavian, an ensemble committed to expanding the repertoire with their own two-piano arrangements of various works and with arrangements/commissions by other performers/composers. Most recently, Duo Octavian performed their arrangement of Johannes Brahms’ “Ein deutsches Requiem” (A German Requiem) with the Ewashko singers under the direction of Laurence Ewashko. Duo Octavian have also presented the Canadian premieres of two arrangements by Russian pianist Dmitri Alexeev, “Porgy and Bess Concert Suite No.1” (based on George Gershwin’s opera Porgy and Bess) and Stravinsky’s “The Firebird.”

As an educator and performer, Suren is a passionate advocate for improvisation on stage and in the classroom, both as a way to enliven the classical concertgoing experience and to expand students’ creative horizons. To this end, Suren made improvising in the piano concertos of Mozart the focus of his thesis research, for which he was a awarded a prestigious doctoral fellowship from the Social Sciences and Humanities Research Council (SSHRC), and also received the generous support of the Sylva Gelber Award Foundation for pursuing improvisation-related performance projects. Suren has been invited to lecture on improvisation to classes at the Juilliard School in New York, and was slated to give an improvisation workshop at the Academy of Fortepiano Performance (cancelled due to Covid-19).